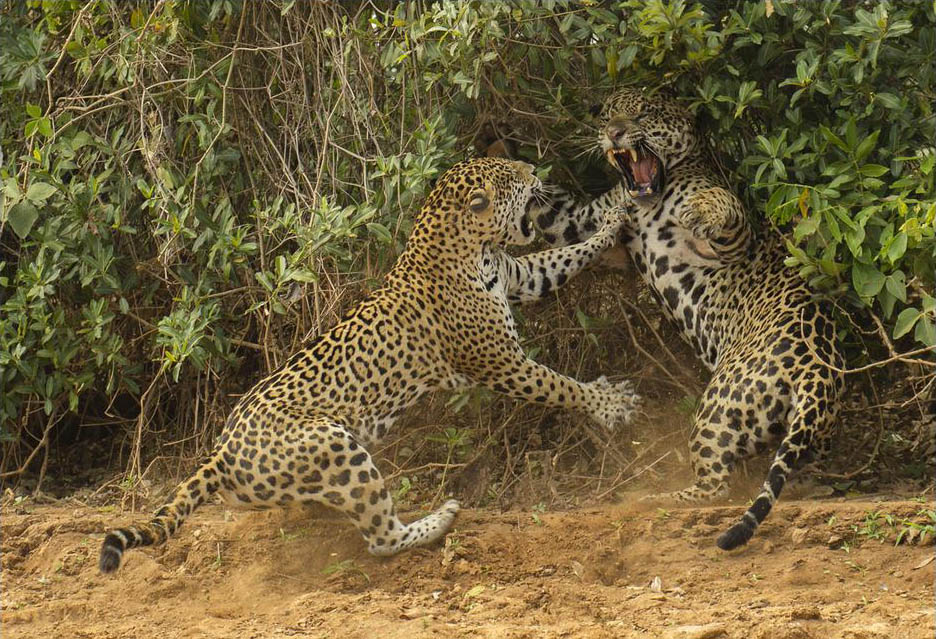 “It was fantastic! We went for Jaguars, and saw Jaguars.” –Arden & Leonard Zalman

“One of the best photography trips we’ve ever had.”

“Your first port of call for sightings of jaguars, pumas and wolves…”

Our extreme wildlife experiences only are possible thanks to the lifelong research and exclusive access of Dr. Charles A. Munn, one of the world’s leading conservation biologists. Our tours are reserved for just a few scientists, special film crews, professional photographers and you. To get an idea of the wildlife you could see on one of our tours, we invite you to view photos taken by a recent guest.

If your quest is to experience the world’s rarest wildlife, Arcana Mundi is the place to begin. In Brazil’s Pantanal, the Jaguar Zone discovered by our scientific advisor is considered the best place on Earth for photographing those big cats. Our Jaguar Extreme explores the zone in depth. Fixed departures are based at the Jaguar Retreat, while private departures are based at the Jaguar Flotel. All tours begin and end with a night at the SouthWild Pantanal Lodge — its Ocelot Tower is the best attraction of any lodge on the entire Transpantaneira Road. For the most discerning and demanding photographers who want a chance to experience all of the top, most spectacular, most iconic mammals of tropical South America, Jaguar Lake & The Lost Lagoon is the ultimate Jaguar expedition.

Every birder and wildlife photographer wants to see the majestic, elusive Harpy Eagle, the world’s biggest and most powerful bird of prey. Until now, serious nature travelers enjoyed approximately one chance in ten thousand of seeing and photographing that bird well. All that has changed. Thanks to our new and unique method of locating Harpy Eagle nests, we can guarantee excellent sightings. Precede your Jaguar Extreme with our Harpy Eagle Expedition.

You also can extend your Jaguar Extreme with our Giant Anteater Extreme. It offers the best chance to see Giant Anteaters. As well, a vast sinkhole falls precipitously into the Earth, holding within it a galaxy of Red-and-Green Macaws that live in the cavities of the pink sandstone walls. Nearby, the crystalline waters of the Río da Prata abound with colorful fish, creating a remarkable snorkeling experience.

Black Waters & White: The Two Worlds of the Amazon, designed by our scientific advisor, is a unique voyage of discovery to the two great and very different worlds of the Amazon rainforest: The mysterious Blackwater World of the Río Negro and the prolific Whitewater World of the Amazon River. The tour will travel to the two extremes of the greatest protected area of tropical rainforest on the planet. It will begin with a visit to the world’s largest and most pristine reserve of tropical rainforest in the Blackwater World – the 5.8-million-acre (2.3-million-hectare) Jaú National Park, which lies at the eastern end of the 15-million-acre (six-million-hectare) Central Amazon Conservation Corridor. The tour will continue and conclude at the western end of the Conservation Corridor with a contrasting visit to the greatest of the reserves in the Whitewater World – the 2.7-million-acre (1.1-million-hectare) Mamirauá Reserve, which protects the largest flooded forest in the world. Variations on this tour include our Black Waters Amazon Expedition and White Waters Amazon Expedition.

Within and adjacent to Brazil’s Parnaíba Headwaters National Park, the endangered Maned Wolf and Hyacinth Macaw are guarded in a private reserve created by our scientific advisor. The reserve also protects the Green-winged Macaw and tool-using Bearded Capuchin Monkey. This unique combination of wildlife treasures and perfect light make it one of the premier photo locations in the country.

On 1 April 2015, the Torres del Paine National Park banned any Puma searching off the roads or off of a single, 6.2-km-long, authorized trail from Porteria Sarmiento Park Gate to Porteria Laguna Amarga Park Gate. Thus, something like 99.9% of the Puma viewing opportunities in the national park are history. Now, imagine the ideal place on planet Earth to sight Pumas – a 17,000-acre private ranch surrounded on three sides by Chile’s Torres del Paine National Park. On the south side is Lago Sarmiento, while on the north and west sides is the most Puma-rich zone of the park. The Pumas wander freely between this zone and the ranch, attracted by thousands of wild Guanacos, which are the Pumas’ favorite prey. Thanks to years of conservation talks with the owners and painstaking negotiations by our scientific advisor, Arcana Mundi Expeditions now can offer our Puma Extreme on the newly-established Reserva Pumas del Paine. Your visit will fuel both the protection and the proper, sustainable appreciation of the Pumas at Torres del Paine.


See our 5-star reviews on Google+

Dreaming of that next epic wildlife adventure? Here are your go-to guys.